New story today! I haven't written for ages so I thought it's about time I gave you all a quick run down on whats been happening here.

Well, Christmas...I'll start from there. Unfortunately me and lady went our separate ways just a mere few days before the big holiday. So I ended up moving in with my good friends Julie Dibens and Mike Dibens. It was great to move in there. I had the whole basement to myself with my own flatscreen TV! Awesome! Mike and Julie went off skiing so my elation of hanging out with them and drowning my sorrows was short lived. So I spent Xmas on my lonesome and the following week leading up to News Years eve.

Things were about to change though as I went for my routine workout at FAC. This real tall 6ft 5ins guy walked around the corner. I recognised him from the swim earlier that morning. He introduced himself as non other than Greg "G-Force" Remaly...which incidently was a self made nickname by the "G-force" himself. I actually though he was joking when he tried to convince me to call him by that name. 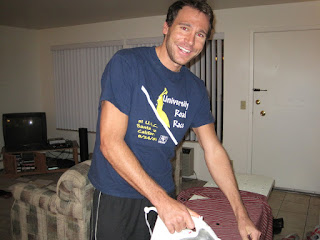 My face them dropped in amazment as I then realised he was serious. HAHAHA! 29 year old super hero!
Anyway, despite the incredulous immaturity that I just witnessed, we agreed in our desparation to find an apartment to move in together.
So a week after we started our search, we found a place on Thunderbird drive. Only a very short distance from the FAC training center. Beautiful.
We moved in a week after that. For anybody who is interested in real cheap furniture, Savers is the place to go! We got two couches for 65 bucks!!! Awesome.

Anyway, I'm interrupting my awesome story to tell you about another one. I had some greats news. My friend Lars Finanger put me forward to Tommaso Bikes for sponsorship. I was real grateful for this, I emailed them back as soon as possible. We set up a meeting and before I knew it was in the Randell Scott's office looking at the brand new Tommaso TT bike. I was soo impressed with how it looked, and how light it was. We chatted for an hour and discussed a contract for me to race for Tommaso. I was elated and excited with this opportunity. If you guys aren't familiar with the brand, then watch out for me racing around Boulder on this black mean machine in my black and yellow kit! Mans colours!
I should be getting my new "mean machine" bike at the end of March. Wacth out for it at any races or training days you see me at. You'll for sure be as impressed as I am.
To top off the excitement I was also informed that I made a front cover on Triathlon Plus UK magazine.

That was huge for me. I was so excited! I am also poster boy for the Highlands Ranch running series! So everything is going well.

Anyway, so, to come back to the original story. Gregmeister Remaly and myself have been living it up in luxury in our bachelor pad. He's great to live with, despite our very different appearences and upringing...I am good looking, Greg isn't. I am only 5ft 8ins, he is 6ft 5ins, I am undeniably intelligent, Greg isn't. That was just a few to begin with. No I'm just kidding.
Anyway, I'm going to go swimming training now. Speak soon, and take care!

Hadley
Posted by Hadmeister General at 9:49 AM No comments: