Hey there Comrades! How is everyone?! Well it's been a long time since I wrote a blog, so I'll try to cut things down as much as poss...but there's so much to tell, it's gonna be a long one, so get comfy!!! I'll start off from Nov 2010 on my return to the UK! I had been away from home for 2.5 years struggling to be a professional triathlete making good money. However 2010 was somewhat a difficult year for me, hence I didn't quite make the grades that I had anticipated to achieve. 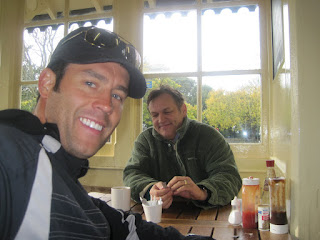 Things changed one day though when I got a phone call at 03:30am from my ever supportive Father who said "Jimbo! Get up, you're gonna get a call from ITV" (television channel). I repied..."what, it's 3:30am, sod that I'm going to sleep, tell them to call me at 8:30am...what's it about anyway?" He said "It's about a dating show...I've entered you for it, it's on ITV...national tv!" I was intrigued, but sleeping was still my priority. Plus I had to be up to ride 3 hrs with triathlete super star Matty Reed at 9am...and those of you that know Matty know that cycling with him is never easy. 9am came around and I got a call from ITV. I didn't even know what this show was, but it sounded fun. I wanted in. All I knew is that I had to come down a "love lift" and choose a date from 30 girls!!! Awesome! They must have thought of me when they invented this show. As it happens my days of dating are long behind me. I'm always tired from training, so my first thought was actually "cool! My sponsors are gonna love this!" Long story short, I was on the plane 2 weeks later about to embark on an exciting TV opportunity. I hadn't seen my Dad for 2 years...an there he was at the airport. It ws a strange feeling. I felt like I was 5 years old again as I walked from baggage towards arrivals. I was so excited. I was actually going to see my parents...for real! In the flesh! Then there he was! All smiles and he must have been somewhat nervous too as he had his leather jacket on, which he reserves for special occasions. It was only when I walked up close and hugged him that I saw paint all over it...haha, oh, it's obviously not for special occasions anymore, he even wore the bloody thing painting!! It was a much needed trip. I was so happy to be at home with my family. At last I could really relax. 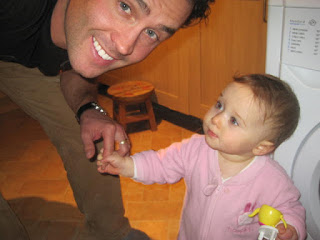 It's a strange feeling to be travelling for so long, sacrificing as much as you can for your career, and then all of a sudden be at home, surrounded by people that love you. I hadn't seen my Sisters little new born yet(well she's one now, so not that new). So seeing her for the first time was amazing...all in all the homecoming was emotional for me...although I didn't show it - cos I'm cool like that :-/ However, the next day I was driven to London for the show. This was exciting! I was pulled into the main studio to rehearse my scenes. I was amazed by it all. This thing called "Take Me Out" was a big deal!! Arrgh, what am I doing? We rehearsed coming down the 'love lift', saying our lines and walking to our placements in time with the music etc. I realised then how bloody nervous I was. 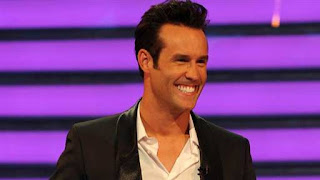 "Shit! This is gonna be done in front of 700 people...I hope I don't stutter!!!!" Then Paddy McGuiness showed up. For those of you that don't know him, he's a TV star in the UK...Comedian/actor, one of my faves. So to see him and talk to him in person was awesome for me. He was a great guy, friendly as well as very very professional. He has everything organised in his mind...very creative and quick thinking. The time had come for the show to start. The crew decided my hair needed sorting, so the hairstylist chopped away and blowed dryed it to look like David Copperfield. I tried to change it slightly, but got busted...not a chance, TV controls you thats for sure. I was directed out of the waiting area, walked behind the studio and I could hear the crowd going crazy! "Shit shit shit! This is real! AAAAHHH". The adrenaline was flowing like I couldn't believe. I thought "bollocks, my mouth is dry, I can't talk, this is on TV in front of 8million viewers!!! There's no way out!" I stood in the love lift above the studio for what seemed like an hour (it was only 5 mins). Then Paddy says "Single man....reveal yourself!" The music I chose (Beautiful girls by B.O.B) kicks off aloud with base to rival the boy racer cars. The lift starts to descend...with me on it. There's no turning back now. 700 of the audience were cheering with curiosity as to who I might be. The 30 girls all glared at me with wonder in their eyes...could I be the one to choose them? As I walked along strutting my stuff looking cool, I reached Paddy wth my arms in the air and turned to the girls...You could hear a pin drop in the thick, highly electified atmosphere that surrounded me."Take it away!" Paddy instructed..."Hello lovely ladies, I'm James from Weston-super-Mare!!!!!"

Nerves racked my entire body, the crowd went insane, but I got the words out, and the ladies responded well. To cut a long story short, I chose a girl after 30 minutes of chatting, jumping in an icebath, and parading around in a bath robe. (You'll have to see the show if you want to know more) So my date and I got whisked off to the 'Isle of Fernando's' which is sunny and warm for our date that consisted of a yacht trip out to sea, and dinner on the coast. 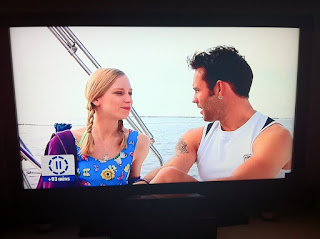 It was a beautiful time, but there was no romance between us despite having a great laugh...well I did. So post 'Take Me Out' adventure. Unfortunatley for me that was good and bad. Good to see my family, but bad as I knew that work awaited me like pending doom. Believe it or not, if you have a bad year in triathlon that means you have to subsidise yourself. It is hard to make ends meet in terms of money unless you get some great sponsors and some great results. For me that meant going back onto the building site for 3 months. 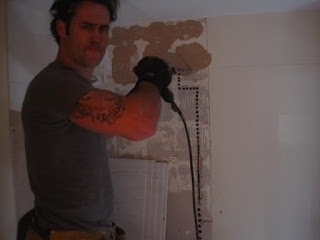 3 months of hard dirty graft. It's good money, but it's hard labour. This time though I was working with my Sisters fiance Steve Hancocks. We're like Bro's! So I had a great time working hard, laughing and eating bacon sarnies. We would work all week from 8am until gone 7pm. We'd be roofing (in the sodding rain), tiling (in the rain), digging trences (in the rain), laying floor, plasterboarding, studding, drilling, plumbing, you name it, we did it. 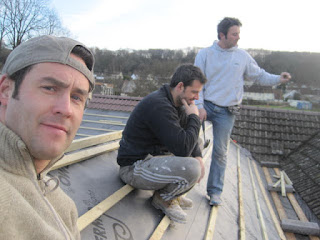 Then on a Friday night it was off the Windsor Pub for some beers with the lads. Although I wasn't used to the drinking. I forgot that the English don't drink for fun, they drink to totally smash themselves up. When I first returned home I thought "I'm still gonna train when I come back". No way hosay. I was exhausted. Building work just utilised any energy I had, and to top it off my Mom begged me to play badminton with her at her club on a Tues and Thurs night. No-one likes playing with her (they don't think she's any good...just cos she can't hit the shuttle haha!) 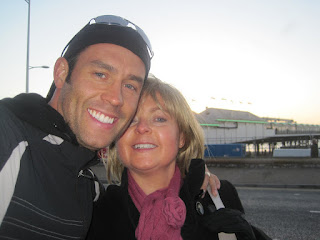 So I had to go down for support and kick some ass for her. Anyway, after 3.5 months of this I was 15lbs over race weight. I then get an email from my good friend and training buddy Matty Reed..."Hadley, are you coming with us to Hawaii...training camp". Oh shit! I can hardly run down the shops, there's no way I'm gonna be able to train with Matty! I replied "Hey mate, I'm not sure if I'm gonna be much use to you. I been working non-stop to raise some money to come back and give it another shot in triathlon...but I'm really unfit and overweight". To which he replied "Hadley, toughen up, get your ass over here. We'll check out chicks on the beach and have a great time". Straight away I was relieved! Although concerned too as I knew then that aint gonna be no "checking out chicks on the beach!" They know me too well, this is trick to lure me into going haha...it worked. I was in Boulder 2 weeks later preparing for the onslaught that lay ahead in 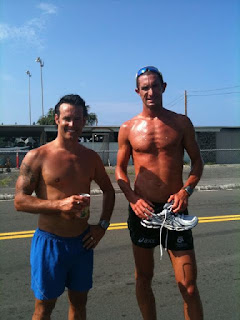 Hawaii. Hawaii was awesome and if you don't know the Reeds I'll tell you that they are the most generous kind hearted people that I know. This is extremely rare, and even more rare in triathlon. They help whenever they can and are truly great friends. Although Matt was tryin to drop me 2 miles out to sea. I was overweight, hadn't touched the pool to swim in about 4 months, and there we were 2 miles out to sea with Matty swimming balls out 1:10 pace. Hence my balls had dropped off out at sea a long time ago. I was absolutely on the rivet!!!! There was no way I was gonna get dropped with these Tiger Sharks just waiting to pounce on my chubby pork like layers of meat. I asked Matty once as he was laughing at the state of my fitness, "Matt, how would you feel if I actually did get eaten by a shark out there, would you feel guilty?", to which he replied "no way, I'd think thank F@&K it went for Hadley and not me". So there you have it, pure honesty haha!!! It's good fun.
Anyway, so now since coming back from Hawaii training has been great with Team Reed/Hadley. I have dropped about 12lbs since my heaviest in UK. I am fresh, clearminded and ready to rock and roll!!! The trip home was a much needed rest mentally and physically, and the TV show went wild. I am coming home to race UK70.3 where I want a top class performance from myself infront of my beloved home crowd.

I love UK and I wanna make my country supporters (if I have any) proud that I represent the GBR! I told you this was a long one, but I hope the pictures kept you entertained enough to read through it. Until the next blog fellow readers, take care! Happy days! Hadley
Posted by Hadmeister General at 10:22 PM No comments: