Hey! Hello fellow readers! Well, I'm calling this blog the "Back to Basics" because that is exactly what's transpired during the last week or so since the Boulder 70.3 Ironman. I was pretty fit leading up to the race.


Training had been going well, and I have been totally injury free for 3 months now. Physically all was going good. But mentally things have been tough for a few months in regards to some personal issues clouding my motivation and performance. This showed during the race of Boulder 70.3. Many people assume that if you're a pro athlete, everything is great. We're fit, professional and have everything sorted ready to race at every event. This is far from the truth. Talk to any of the pro's in any sport, they have all been through some kind of heart ache and stress, and without doubt they will tell you that no-matter how fit you are, you need a clear mind and focus in order to perform.

During the Boulder 70.3 I knew it was going to be a tough one. The few days leading up to it were especially difficult. To make things tougher, the field was real strong with the likes of Andy Potts, Tyler Butterfield, Tim De Boom, Matty White, Josh Rix, Ritchie Cunningham, Stevie Hackett and gun cyclist Tom Lowe. To race guys like this, you better bring your "A game".

The swim was great. We shot off with Andy and Hackett out in front. Then came Tyler followed by the pack with me in it. I exited the water with Josh Rix and Matty White, my two training buddies here in Boulder, so I was happy with that. The bike performance coming from us was insane! We were cycling harder and faster than I would have imagined. I went to the front and worked with 2 x Ironman World Champion Tim De Boom to persue the couple of athletes up the road that included Ritchie Cunningham. I was riding my Tommaso "Sixth Sense" with 808 zipps. The combination was awesome. Retul bike fit experts perfected the set up, and I felt great out there. We completed the bike course in a time of 2hrs 5mins for 90km (56miles)...thats fast.
This is where my energy ran out. With every step of the run I felt terrible. The stress and upset of recent months have left me drained. The heat was unescapable, and the legs were operating from pure will. There was nothing in the tank, and I soon realized that this was going to be a long, tough, solitary half marathon. All my buddies ran off up the road competing for their rightful position, whilst I was left behind battling with my will. I eventually reached my goal (the finish line) in 9th or 10th, but I learned something very important about myself and the lifestyle of an athlete.
Everyone trains their bodies to the peak of excellence...but most athletes can neglect training of the mind. The mind, focus and motivation can make the difference between success or failure. Every professional athlete is fit, but the one that turns up on the start line the most fresh, the most intelligently trained, the most clear minded, the most focused and the most determined will perform to the best of their ability. Life has it's ups and downs, and if you're in a lull, or a bad state, then you better make damn sure you do everything in your power to release it, and change the way you perceive it...otherwise it's "good bye" to your performance or even your career. I have gone back to the drawing board to find a fresher approach to succeeding in this sport. Sometimes it takes a wake up call to realize that things aren't on the right track. "It's never too late if you wake up in time". Hah, I just made that quote up...good hey?

I have been training hard now with Matty White, Josh Rix and Jason Shortis. It has been awesome, refreshing and inspiring. 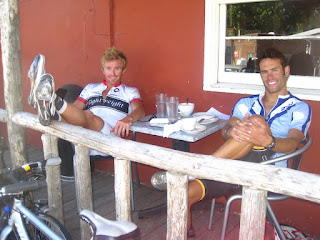 They have been instrumental in re-focusing my attention to the future and what can be achieved. I am extremely grateful for that.

So bottom line is this. It makes no difference whether you're a pro athlete, an age group athlete, Tiger Woods or anyone else. If you want to succeed in anything you do, there is really no stone that you should leave unturned. A clear mind and a "fresh start" is sometimes all you need. A lesson can be learned and a new approach can be designed from any undesired experience if you search for it..."the silver lining".

Anyway, enough of that for now. Training is back on track, the weather in Boulder is beautiful, and everything looks good! Keep a look out for my races in the near future!

Till next time ladies

Hadley
Posted by Hadmeister General at 3:48 PM No comments:

The Fall at the Peak

Hi there lads and ladies! I should have written this right after the Boulder Peak race to keep you up to date etc, but I have been so busy again getting my old car towed, working, selling my bike, getting another car, plates, insurance, training, dancing and singing. So here I am on Thurs night before the big Rohto Boulder 70.3 Ironman this weekend. Firstly, the Boulder Peak race!
It was a beautiful day at the resevoir in boulder. I had been training well, and I was feeling good, and ready to race! I started off next to Matt Reed in the swim. He swims great, so I figured if I can stay on his feet than I would be out front pack. The gun goes and we're off! We smashed out the first 400metres real quick. It felt easy to me for some reason...I was fit, and it was showing. Somehow, someone moved across me and in the mess of it all, I lost Mattys feet! Due to this I was now in the lead of the second pack...again. Bryan Rhodes was swimming great in the front pack so I had a hard job to keep the gap as small as I could. I came out of the water 4th, got the Tommaso out on the tarmac and hammered those peddles.

It took me a while to get started as Josh Rix, Matty White, Tim De Boom and Tim Reed came flying along to join me. We smashed it up Old Stage rd, one of the steepest climbs in Boulder, and a great part of the race. I could see Bryan Rhodes just ahead, and the adrenaline kicked in. I reached the peak of old stage rd, and then came the fastest down hill sections I have ever experienced in a race. I was flat out to get as much speed as possible. Josh Rix later told me that we hit 90kph down there! For all you Americans and English, that would be about 56mph! Right at the bottom of this descent is where disiaster struck for the Hadmeister.

All I can remember is the steering going wild as I gripped my hands around the brakes...I assumed that my tyre was flat...going at this speed! So I skidding down the hill, just praying to hold control until I could slow enough to come to a safer site to crash on other than the tarmac. I flew straight off the road, into the gravel, dodging all kind of boulders and rocks...goodness know how I missed them all. This is that same section where a lady died in a crash sometime ago. Anyway, I teared up the umbankment and slammed into something that eventually brought me down. I stood up in a second, and realised I was totally fine. Not even a scratch!!! I turned to see Rixy and a couple of other athletes flying by. I grabbed the bike and saw the result...a blown out tyre! 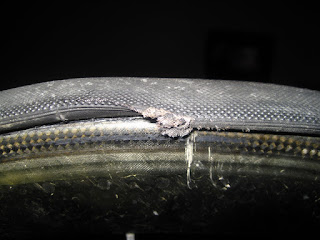 I shouted "can anyone lend me a wheel?!" I trained hard, tapered well, and I just really wanted to finish the race. I knew by now I was out of money contention, and I knew I would either get a penalty or DQ'd for accepting outside assistance, but who cares? I'm an athlete, and I wanna finish this bastard race! Despite what was written by people on slow twitch about me, the real story was this:

A lady approached me on her steel sunday cruise road bike. I said "can I borrow your wheel please?" She said "sure, here you go, but how will I find you?", I said, "I'm in the pro race, so come to the end of the run finish and I'll meet you there". So as she released her quick release on her wheel, I released mine. I passed her my $1000 carbon zip as I recieved her steel rim wheel which included such flash trimmings as a reflector! Love it. So I said "thank you so much!" and off I went,on a steel wheel half inflated with a beautiful looking reflector spinning round. I finshed the course and racked the bike.

I took off fast on the run. I was catching some guys pretty quick, but all of a sudden I get a time penalty. I wasn't sure what for, but I had to stand there for 1 minute, then get going again. It transpired that he was supposed to stop me for the outside assitance and tell me that I'm DQ'd, but for some reason he didn't know this. I went for it again, desparately chasing the guys I already caught sometime earlier. I was fierce, and determined to have a good training day at least..I ran a solid 34min off the bike (not including the 1 min time penalty)so apart from the crash and the stand down, I was really pleased with my performance.

Obviously the results don't show it, but I was racing well, and I'm fit to race. I have had some bad happenings in races recently. If I'm not careful I'll be known as "Calamity James". I was just so thankful that I survived the crash unhurt...hospitals are expensive here, and if I died, I'm pretty sure my Mom would miss me...I think. Next up is Rohto Boulder 70.3 Ironman this weekend...check out my results! I hope to redeem myself this time. So thats the story of the Peak! Till next time ladies ;-)
Posted by Hadmeister General at 8:02 PM 2 comments: